Home
Supplements
Dr Mercola Krill Oil Review: Is it Worth It?

Ask any fitness enthusiast about his or her supplement regime and there are a few ‘basics’ that you can expect to find: whey protein, creatine, multivitamins, and fish oil. The benefits of all of these supplements are not in question which is why even people who are rightfully skeptical of the whole supplement industry usually still take these basic supplements.

We will also talk a bit about Dr. Mercola himself, and why you should be wary about taking nutritional advice from him or his website.

Fish Oil vs. Krill Oil – 4 Reasons to Opt For Krill Oil Instead 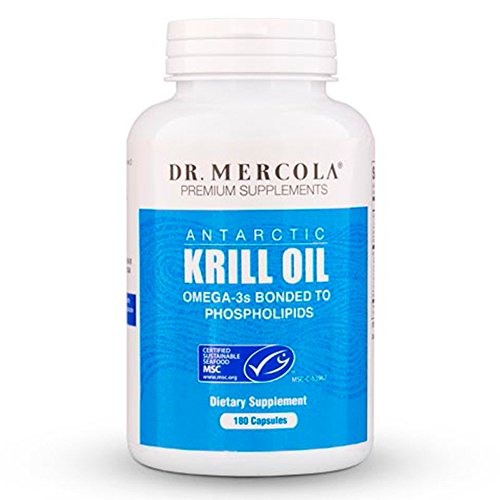 As the name implies, krill oil is derived from krill, which are tiny crustaceans that are plentiful in the ocean and also a major food source for marine life. Krill is so plentiful that their total biomass is about 600 million tons; more than double that of human beings.

In terms of beneficial fatty acids, it provides Eicosapentaenoic Acid (“EPA”), and Docosahexaenoic Acid (“DHA”). Both EPA and DHA are classified as beneficial Omega-3 fats and have shown scientifically proven benefits. Namely, EPA and DHA supplementation has been shown to lower triglyceride levels, bad cholesterol levels, inflammation, and even symptoms of depression.

Supplementing with krill oil will give you the same benefits as fish oil, given that they both contain EPA and DHA. So how do they differ? How can you justify the higher price of krill oil relative to fish oil? To be upfront, you should know that krill oil will cost you a considerable premium over fish oil.

For one, krill, unlike fish, are solidly at the bottom of the food chain. As such, there is a much lower chance of them suffering from toxicity (particularly mercury) from consuming prey, unlike fish such as salmon and mackerel (from which fish oil is derived).

Unlike fish oil, a majority of the EPA and DHA in krill oil is in the form of phospholipids (a phosphate group at the end of the fatty acid). This results in higher bioavailability and absorption, meaning that you would need a lower dose of krill oil to get the equivalent benefits of fish oil.

If you bother to do the research, you know that overfishing is a major ecological problem. Overfishing has been rightfully labeled as a crisis to both our oceans and even to humanity itself. Fish oil consumption contributes to the problem and not the solution.

According to the CCAMLR (the Commission for the Conservation of Antarctic Marine Living Resources), the actual annual catch is only about 0.3% of the unexploited biomass of krill, compared to the set trigger level of 1% of the unexploited biomass. In other words, there is still plenty of stretch room when it comes to fishing for krill compared to fish.

Astaxanthin is an antioxidant that is also responsible for the reddish color of salmon meat. And krill, unlike fish, have much higher levels of astaxanthin. Astaxanthin has also been shown to have minor benefits on cholesterol levels, namely by increasing the levels of good cholesterol. 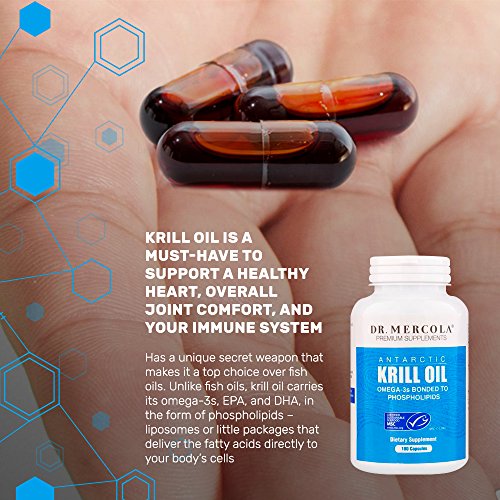 Dr. Joseph Mercola is a hugely popular proponent of alternative medicine and former osteopathic physician. He now focuses on his hugely successful online supplements business, and his website espouses many alternative and natural health views that are at odds with the prevailing views of the medical and scientific communities. We will discuss this further in the below section titled ‘Dr. Mercola Controversies’.

But for now, let us take a look at his Krill Oil product; is it worth your money? 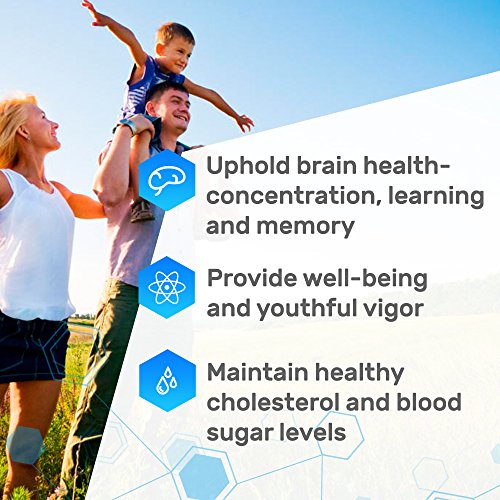 Let’s start with the essential facts about this product.

Note that the capsule itself is made out of tilapia fish gelatin. 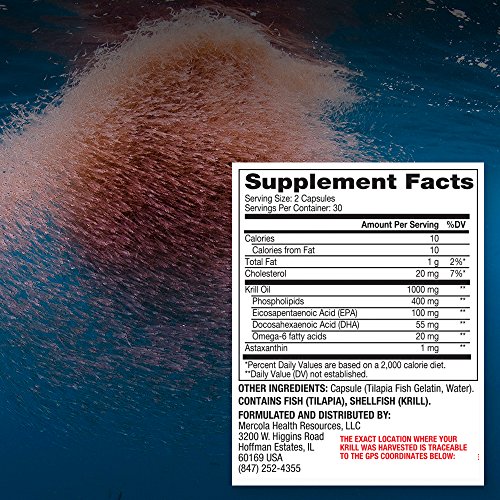 The most important metric we look at when assessing a fish oil or krill oil is its EPA and DHA content, since that is where the primary benefits come from. Here, we see that each serving of Dr. Mercola’s Krill Oil contains 100mg of EPA and 55mg of DHA. For reference, a standard fish oil serving contains 180mg EPA and 120mg of DHA.

This ratio holds for almost all fish oil supplements, so much so that when you see ‘double’ or ‘triple’ strength fish oil advertised, you will find the same EPA/DHA ratio.

In any case, it is clear that the EPA and DHA content in Dr. Mercola’s Krill Oil is significantly lower compared to your generic fish oil. However, we have yet to account for the increased bioavailability of krill oil. As mentioned above, studies have shown that krill oil is approximately 60% more bioavailable compared to fish oil. Using that as a multiplier, this gives us the equivalent of 160mg of EPA and 88mg of DHA in fish oil.

So the fact remains that even with a higher bioavailability, one serving of Dr. Mercola’s Krill Oil will give you about 11% less EPA and 27% less DHA compared to your generic fish oil.

This is not good as it suggests that you would probably be better off with a generic fish oil supplement, at least in terms of EPA and DHA delivery.

Dr. Mercola’s Fish Oil also contains a small amount of Omega-6 fatty acids, which is, of course, a benefit, but at such low amounts, almost negligible. Similarly, the amount of astaxanthin at 1mg is very low; the studies quoted above on the benefits of astaxanthin almost always used daily astaxanthin doses of 6mg and above.

To conclude, while Dr. Mercola’s Krill Oil will definitely give you health benefits, you might be better off with a generic fish oil supplement instead due to the lower amounts of EPA and DHA, even accounting for increased bioavailability.

Using prices from Dr. Mercola’s official website, one two-capsule serving of Dr. Mercola’s Krill Oil will set you back $1.23 based on MSRP price. However, it is currently retailing (as at end-November 2017) for an almost 30% discount, leading to a single serving price of $0.88.

To compare this to fish oil, well, it is far more expensive. One serving of fish oil, which as we noted has more EPA and DHA compared to this product, will cost you $0.06 to $0.20 (For the latest prices and discounts, check here). This means that krill oil has a huge premium over fish oil (400+% to 2,000%!) that in our opinion is not worth paying for.

As with many other natural health and alternative medicine proponents, Dr. Mercola has been subject to numerous criticisms from the scientific and medical community.

This is particularly true given his immense popularity.

Dr. Mercola has had a total of four warning letters from the FDA issued against him. Two of those letters were for labeling and marketing products for medical use, which is in violation of federal law.

Specifically, he was claiming that some of his products ‘offered exceptional countermeasures against cancer and cardiovascular disease’, ‘reduce the risk of heart disease and has beneficial effects against Crohn’s disease’, and ‘fight cancer and normalize blood pressure’. This was in 2005 and 2006.

The FDA also issued him warning letters to him in 2011 for claims in marketing his infrared camera product. Dr. Mercola was advertising it as ‘cancer screening tool’ and as an accurate diagnostic tool. He also had to pay a settlement of $5.3 million to the Federal Trade Commission after claiming that his indoor tanning beds actively reduced the risk of cancer. Meanwhile, science shows the exact opposite. 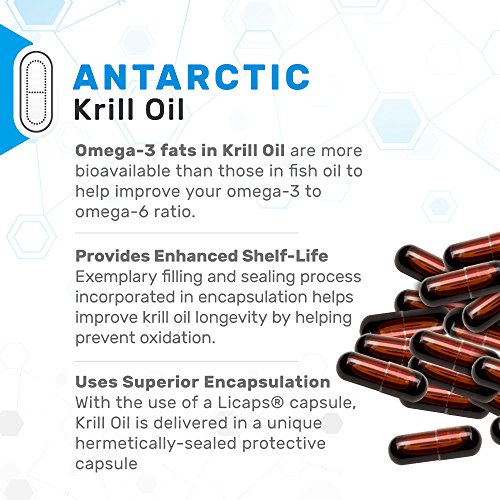 If you are looking for a krill oil product, then you will probably be satisfied with Dr. Mercola’s Krill Oil. It is certified by the Marine Stewardship Council, which ensures that the krill harvesting and manufacturing adheres to a certain standard.

It also makes sure that all of these are done in a sustainable manner and that no non-krill species are captured. Hence, if sustainability is a big factor in you choosing krill oil, then this will be a further benefit for you.

However, if you are only interested in krill oil for its beneficial fatty acids, then we suggest that a regular fish oil supplement would better serve your needs. As we have shown, you will be getting less EPA and DHA compared to fish oil while paying a premium of 400% or more!

Finally, if you are a big proponent of science-based medicine, ethically, you will probably not want to support Dr. Mercola and his anti-science views plus questionable business practices.