Home
Supplements
What is the Best Way to Take Turmeric?

When you hear the word ‘turmeric’ you probably think of its fragrant aroma and delightful taste of delicious cuisines such as curry. But turmeric is more than an ordinary spice that fires up your nostrils and your taste buds. It also has many research-backed health benefits that most people remain unaware of.

In this article, we will spell out exactly how turmeric can improve your health and show you the best way to take turmeric. This all comes down to a concept called bioavailability. In laymen’s terms, this refers to how well your body can absorb a particular compound and bring it into systemic circulation. As we will explain in further detail later, because of this, not all methods of consuming turmeric are equally effective.

The benefits of turmeric come down to its active ingredient, curcumin, which is what gives turmeric its bright yellow color. In ancient times it was used in Ayurvedic medicine (ancient medicine from India). But in the modern era, a significant amount of research has gone into studying curcumin’s benefit to the human body. Here’s what the research has found.

Free radicals cause oxidative damage, which is thought to be one of the many mechanisms behind aging and many diseases. Studies have shown that curcumin is not only an anti-oxidant, it also stimulates the activity of our body’s own antioxidant enzymes.

A third study done on patients with tropical pancreatitis showed that curcumin (500mg daily) reduced the oxidative stress brought on by this chronic condition. And finally, a fourth study done on healthy middle-aged people showed that the antioxidant benefits of curcumin-induced a variety of health-promoting effects in the participants.

In recent years, turmeric has been very popular in the fitness realm due to its proven anti-inflammatory effects. Athletes undergoing heavy training loads use turmeric’s anti-inflammatory properties to enable them to recover faster, particularly from injuries. More and more joint supplements are also adding curcumin into their formulations.

A final meta-analysis of all the clinical trials examining turmeric’s effectiveness in helping joint arthritis symptoms concluded with the following. “These randomized clinical trials provide scientific evidence that supports the efficacy of turmeric extract (about 1000 mg/day of curcumin) in the treatment of arthritis.”

#3 Curcumin can reduce symptoms of anxiety and depression 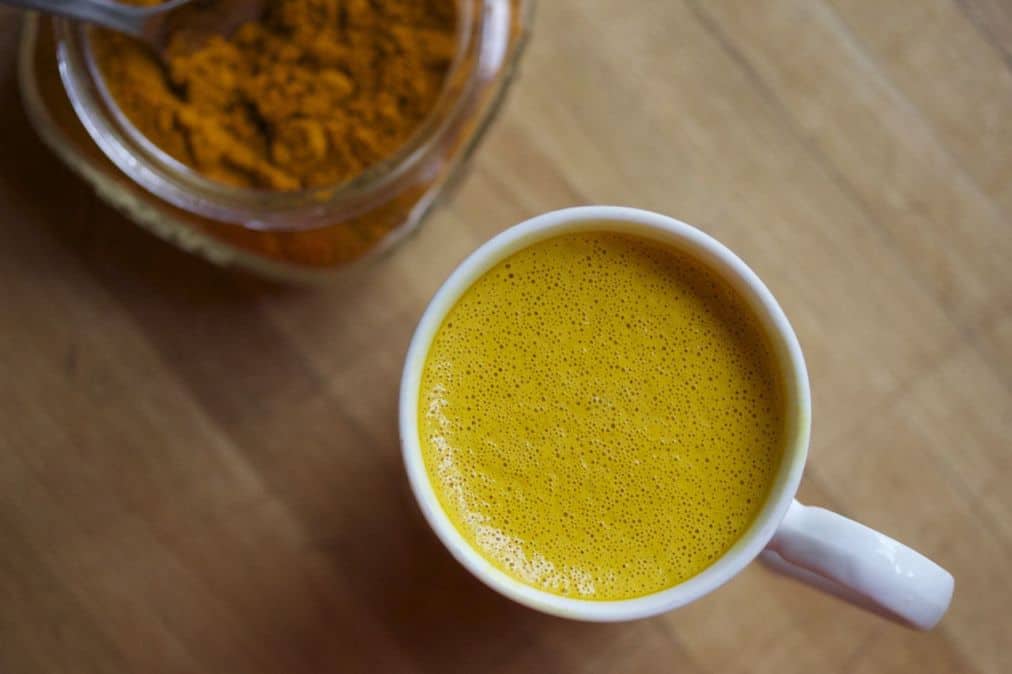 Depression and mental health are major issues of the modern age. But it appears that turmericcan serve as a natural medicine for those afflicted. While the effects demonstrated by the studies are not considered to be very strong, they are at the very least notable.

With our high sugar diets and sedentary lifestyles, type 2 diabetes is on the rise globally. According to the World Health Organization, the global prevalence of diabetes among adults has almost doubled, from 4.7% in 1980 to 8.5% in 2014. The American Diabetes Association noted that diabetes was the seventh leading cause of death in the United States. This is a serious health issue.

#5 Turmeric can improve your digestion

If you have a sensitive stomach, then turmeric may be able to help. Sure, consuming large amounts of curry may not be wise, but adding turmeric to your diet can be. One study found that dietary turmeric increased bowel motility as well as improved beneficial gut bacteria. Interesting fact: the researchers used curry, both with and without turmeric, to conduct the study.

#6 Turmeric may reduce your risk of heart disease

According to the CDC, heart disease is the leading cause of death for both men and women in the United States, accounting for about 25% of all deaths. The American Heart Association recommends 150 minutes of moderate aerobic activity or 75 minutes or vigorous aerobic activity per week, guidelines most people do not follow.

For those couch potatoes, turmeric may offer them the chance of lowering their risk for cardiovascular events. An eight-week study showed that curcumin ingestion was as beneficial as moderate aerobic exercise training.

To be specific, both the curcumin and exercise groups showed significant and equal improvement in vascular endothelial function. This function declines with age and is associated with an increased risk of cardiovascular disease.

I’ve talked a lot about the amazing health benefits of Turmeric before and even given you the Best 4 Turmeric Supplements You’ll Love!

How Much Turmeric Should You Take Daily?

Many studies have verified both the safety and beneficial properties of turmeric. Even taken at high doses, turmeric is still safe. In one study, subjects took escalating doses of turmeric from 500mg all the way up to an astounding 12,000mg! The study concluded that the tolerance of curcumin in high single oral doses appear to be excellent. So you should have nothing to worry about ‘overdosing’ on turmeric.

That said, the University of Maryland Medical Center recommends the following dosage for adults:

Note: For ease of conversion, you should know that turmeric powder contains about 2 – 3% turmeric by weight. A study found an average of 3.14% curcumin concentration in pure turmeric powder. So one tablespoon of turmeric powder (~6.8g) will yield about on average 214mg of curcumin.

What is the Best Way to Take Turmeric for Maximum Absorption and Effectiveness?

The science is clear; turmeric is absolutely beneficial to your health and it something that you should most definitely add to your diet. But the issue of bioavailability remains, and curcumin has extremely poor bioavailability.

Here’s how bad curcumin’s bioavailability is, taken by itself, even doses of 4,000mg would be wholly inactive! You would have to take massive doses of 8,000 to 16,000mg and even then it would only be slightly active. 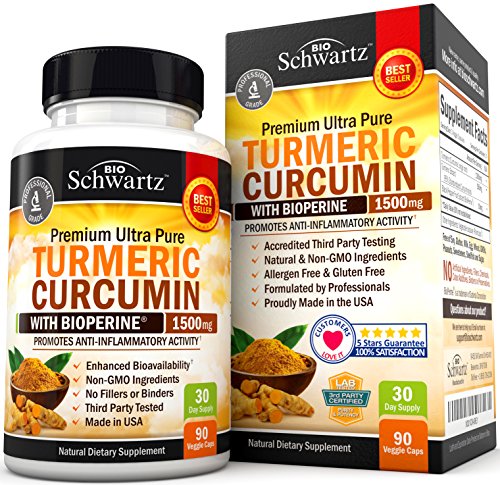 Black pepper contains a molecule known as piperine. By itself, piperine doesn’t do much, however, it inhibits enzymes that would otherwise attack other molecules. Your liver is a powerful detoxification organ. Through a process known as glucuronidation, it signals your body to excrete drugs via urine instead of letting them into your circulatory system.

Piperine inhibits this process and thus allows curcumin to enter your circulatory system. This is why the top recommendation is to always pair turmeric with freshly ground black pepper.

How effective is this method? Research shows that pairing curcumin with piperine increased its bioavailability by an amazing 2,000%, a twentyfold increase! Therefore, if you are cooking with turmeric always make sure that you include black pepper into the mix. Fortunately, most curries already contain black pepper.

In the study above, 20mg of piperine was paired with 2,000mg of curcumin, for a 100:1 curcumin to piperine ratio. Since black pepper has a piperine content of about 5 – 9%, you would need about 110mg to 200mg of black pepper for every 1,000mg of curcumin; not a lot at all! So there’s no need to worry about having overly peppery cooking.

Finally, if you are buying turmeric or curcumin supplements, look for those that come already paired with black pepper extract or piperine.

Ayurvedic medicinal practices recommend taking turmeric with ghee, a type of butter. There is a legitimate scientific reason for that practice; one of the reasons for curcumin’s poor bioavailability is that it is not very soluble in water. It is, however, fat soluble.

Therefore, another way to increase turmeric’s bioavailability and thus effectiveness is to pair it with some healthy fats. You have plenty of options; if taken by itself you can pair it with coconut oil or olive oil, which you can also use when cooking with turmeric. Other healthy fats options you can opt for are almonds, avocados, and of course eggs.

There are also commercial curcumin formulations on the market that are already bonded with lipid molecules to increase bioavailability. Studies have suggested that such formulations have 30 times better absorption compared to unformulated curcumin.

Method 3: Heat Turmeric Up to Increase its Activation

The great thing about the three methods above is that they are not mutually exclusive. You can cook turmeric in a healthy fat while throwing in some black pepper into the mix; a simple way of combining all three methods at once.

Of course, if you are not always cooking with turmeric and are taking it as a standalone powder or adding it into a healthy shake, then a simple pairing with black pepper or healthy fat would work almost as well.

Out of all the myriad benefits of turmeric, this one seems almost minor. However, if you are taking turmeric specifically for its digestive benefits, then consuming it by itself is fine. This is because in this scenario you do not need the curcumin to be absorbed from the intestines into the circulatory system.

Turmeric: Not a Miracle Spice but Definitely a Healthy One

Turmeric and curcumin have unfortunately been the subject of a lot of hype. Some of the more bombastic claims surround its anti-cancer properties; however such studies have mostly been performed on animals and not humans. Those claims are largely untested and have resulted in a lot of backlash against its so-called ‘miracle benefits’.

Despite these bombastic claims, there is no doubt that turmeric has real, tangible health benefits. In particular, its anti-oxidant and anti-inflammatory properties have been well studied. Coupled with the fact that there are little to no negative effects from consuming turmeric, even in large quantities, there is absolutely no reason for you not to add it to your diet.

Where to Buy Turmeric Online?

It’s always worth checking out Amazon, but I personally prefer the quality selection and prices found here at Thrive Market. If you haven’t signed up yet, it’s kind of like having an online Whole Foods Co-Op at a fraction of the price!

If I had to recommend a SINGLE supplement… I would personally go with this Pure Turmeric Curcumin superfood supplement here.